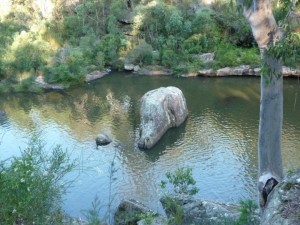 THOUSANDS of hectares of pristine wilderness on the edge of south-western Sydney, fought over by mining and environment interests for decades, will be saved and opened to the public as a national park if the NSW Coalition wins government in March.

But the announcement, to be made today by the Opposition Leader, Barry O’Farrell, sets up a potential conflict with BHP Billiton, which still holds the right to mine the billions of dollars worth of coal in the area.

The park, based on the Dharawal State Conservation Area, would add about 6200 hectares of bushland to the public estate, and add one of the final pieces to the jigsaw of protected wilderness areas around Sydney.

It is one of the last remaining areas of intact natural bushland near the city, and sits between the Royal National Park and the Blue Mountains World Heritage Area.

Mr O’Farrell said ”no deal has been done” with the mining company, which revised plans to mine under the conservation area in October but retains the right to apply again over the 30-year life of its lease.

Mr O’Farrell, who hiked in the area yesterday with the shadow environment minister, Catherine Cusack, acknowledged the Coalition would need to enter into discussions about potential compensation.

”We will be having sensible discussion with the relevant stakeholder to get the best outcome for the community,” he said.

An environmental body, the Nature Conservation Council of NSW, and the National Parks Association welcomed the plan.

”We see the Dharawal National Park proposal as an important step towards better conservation in Sydney’s drinking water catchment and beyond,” the council’s director, Pepe Clarke, said.

The head of the Total Environment Centre, Jeff Angel, said: “We look forward to more enlightened environment policies from the Coalition and note the new park should be gazetted without a depth restriction in order to protect it from mining.”

A BHP Billiton subsidiary, Illawarra Coal, had planned to dig up $60 billion worth of coal over the next 30 years, much of it from under Dharawal.

The area became the centre of a bitter campaign over reconciling coal mining and clean drinking-water catchments. It contains 632 Aboriginal sites, as well as 226 upland swamps filtering water into the Georges River through 46 streams. Over 200 native animal and plant species are found there, including the vulnerable powerful owl and yellow-bellied glider.

The mining plan was revised in October, after the NSW Planning Assessment Commission released a scathing report into the proposed mine, which was expected to crack the surface of the conservation area.

The commission cited the threat to water catchments and concluded that society as a whole would be better off if the coal was left in the ground.

A new plan, which excludes coal mining under Dharawal and other vulnerable areas, is being considered by the government.

A BHP spokeswoman said the company would work with the Coalition to try to maintain jobs and economic benefits for the region, as well as protecting the environment.