Rivers SOS received a request for a meeting with a delegation of 15 water and soil conservationists from Shaanxi province, wanting to discuss “how to protect river systems and water sources” and “the factors which influence river health.”

The Chinese province of Shaanxi has striking similarites to NSW: coal mining is important and expanding, but in the process adding to the pollution of river systems and the destruction of groundwater sources. Water shortages loom large – groundwater is being extracted at an unsustainable rate and water treatment plants are unable to treat all contaminants successfully. 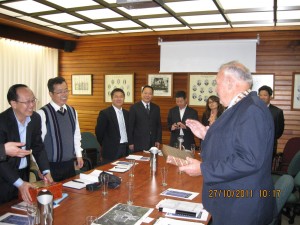 They arrived on their bus yesterday, with their interpreter. We held the meeting in Wollondilly Council Chambers at Picton, thanks to the help of  Council’s Environment Officer Brad Staggs. We briefed them on the work of Rivers SOS and our campaign for a 1km safety zone around river systems to protect them from mine damage. We showed them photos of dried up swamps, polluted rivers and creeks, and dry dams round NSW.

The Mayor and General Manager of Council exchanged presents with the delegation and they were then taken to view the tragedy of nearby Thirlmere Lakes, and told of the newly released Pells report which implicated mining in the loss of water. They lunched at Tahmoor Inn before going to Warragamba for a tour with the Sydney Catchment Authority.

It seems extraordinary that they sought out a meeting with a non-government activist group like Rivers SOS. Of course they won’t have the freedom to protest as we do, but perhaps this is changing, and we will be remaining in contact.

This entry was posted in News. Bookmark the permalink.